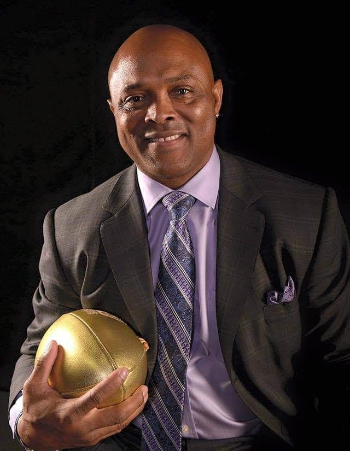 Long before he became a Super Bowl Champion, Brian Mitchell was one of seven children raised by loving parents in Plaquemine, Louisiana. Brian learned to value both education and athletics while attending the University of Southwestern Louisiana (now the University of Louisiana at Lafayette), where he attained the NCAA record for most rushing touchdowns by a quarterback.

Even in those early glory days, Brian was well-known for his ability to encourage and motivate his peers. His athletic prowess and work ethic took him all the way to the NFL, starting with the Washington Redskins in 1990 as a return specialist and running back. In his second season as a Redskin, Brian set NFL records in punt return yards and punt return touchdowns, supporting the team all the way to a victory in Super Bowl XXVI.

Despite these record-setting efforts, Brian has always maintained a positive attitude and genial nature that allows him to inspire and connect with people. He saw many careers cut short when players allowed their ego to rise above the game—and when it came time to retire from the NFL, Brian vowed to show his gratitude for the many blessings he had been given. He regularly appears at charity events, corporate functions, and other opportunities to raise funds and awareness to benefit the community. He also serves as a mentor to young athletes, advising both amateurs and pros on making a successful transition out of athletics and building a rewarding post-game life.

Today, Brian is the co-host of many NBC Sports Washington shows, including Redskins 100, Countdown to Redskins Training Camp, and Training Camp Daily. Brian also co-hosts Redskins Kickoff Live and Post Game Live on game days. Additionally, he is the host of The Brian Mitchell Show on Team 980, an Urban One affiliate.  He also appears as an analyst and commentator on regional and national sports radio shows and podcasts. Known as a great chef, Brian enjoys cooking—his specialty is Cajun food. He is also an avid golfer, and when he is not spending time with his wife Monica and their four children, you can often find him on the golf course.

Brian’s NFL career spanned 14 years, including playing three years with the Philadelphia Eagles and one with the New York Giants. He is a three-time NFL All-Pro, was named to the Pro Bowl in 1995, was inducted into the Redskins ‘Ring of Fame,’ and was selected as one of the 70 Greatest Redskins of All Time. To this day, he holds the second-highest all-purpose yards gained in the NFL, as well as the second-highest career special-teams touchdowns. While many see these achievements as mere statistics, Brian uses them to instill the values of hard work and dedication to a variety of audiences nationwide.